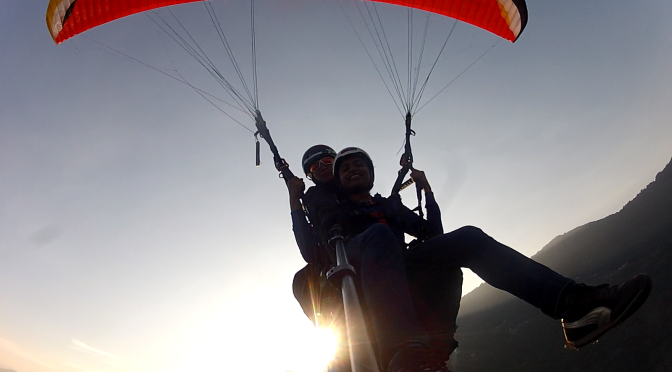 Until you spread your wings,You will have no idea how far you can fly.

Due to its geology, Sikkim has excellent paragliding launch sites and ridges. This, along with the sheer beauty of Sikkim, make this region a popular spot for paragliding. About 10kms from MG Marg in the outskirts of Gangtok, is the office of Fly Sikkim Adventure – the organizers for our paragliding experience.

How did we get there?

Intending to try this on the day that we were heading to Gangtok from Pelling, we informed the office of Fly Sikkim Adventure few hours prior to our arrival so as to book some spots for us. If you are in Gangtok, head early to this spot around 10 AM and do inform them in advance.

Banjhakri Falls and Energy Park: We arrived at the office of Fly Sikkim Adventure around 1:30 PM and registered for the activity. The place was however busy with other tourists and we were told it would take another hour and a half before we can get our turn. They advised us to check Banjhakri Falls and Energy Park in the mean time, which was less than a kilometer away.

Named after the folklore of a shamanic healer around the nearby forests, this 100 ft waterfall is surrounded by a theme park. The park has a small artificial lake near the entrance with a dragon figure in the center. The park also houses various other figures from folktales, a couple of bridges across the stream and numerous spots to sit and relax.

Soaring across the sky: After a visit to the park, our wait was finally over. All of us opted for the Medium Flight except for our friend Vijay, who being a big guy, exceeded the max weight limit(70-75 kg) for paragliding during the late afternoon due to thinner air. The approximate cost for each one of us including the video for the throughout act was 2500 Rs. The rest of us were taken in jeeps up a hill to reach the launch pad which was at an altitude of 1420 meters above sea level. Nervous yet excited, we reached the launch pad, where our pilots were awaiting our arrival.

To be honest, none of us had tried this before and we were quite hesitant. The pilots seemed composed and professional with their suits on and this boosted our confidence. They gave us a helmet each and a GoPro camera on a stick to capture the entire descent. The scary part is the jump. The pilot just asks you to run along the launch pad and across the edge and you have no choice but to trust your pilot. But once you’ve taken the leap of faith, its magical. Gliding along the sky like a bird, scenic green valleys below, hills and mountains along all directions, the Sun going down in the backdrop all combine to give you an experience that is just surreal. Although up more than a 100ft in the sky, it feels calm and soothing and you feel you just cant have enough of this.

My pilot probably felt he should interrupt my moment of serenity and asked me if I wanted to add some more thrill to this already amazing flight. I instantly said yes and then he started steering it sharply in turns to the left and the right, increasing the pace of the descent and also the heartbeat, giving an exhilarating feel. The pilot asked me to prepare for the landing by running in hard as we reached ground. The fun may have ended but it will always be etched in my memory.

For someone who has not experienced it before, this is something not to be missed. Paragliding is safe and not scary as it may seem. 11 AM- 2 PM is the best time to do so. Be there an hour earlier than whatever time you intend to do so as other tourists may hold up the queue.