What seemed like a quiet and calm town in the morning with empty streets, closed shutters of shops and a meager amount of  people on the streets, quickly changed into a bustling and happening place. Amidst a sea of lights, I stood dazzled by the thousands of lanterns that adorned not only the shops, restaurants and houses but the entire streets themselves. The lanterns of various sizes, shapes and colors just hanging above the streets and along all the buildings in the Ancient Town area are sure to provide a festive mood to anyone who walks into this UNESCO World Heritage Site.

It was still daylight as we entered the Ancient Town. Initially, we were a bit skeptical about paying the 120,000 Dong pp entrance fee as we could see a normal street ahead of us. We were glad we took Ly’s (our host in Ho Chi Minh City) advice to go ahead and visit this place at night. The streets of the Ancient Town are vehicle free an hence its safe and easy to traverse by foot. We walked ahead munching on some rice crackers and found some good deals on shawls and tees. The magic began as it started getting dark and the colorful lamps above the road were lit. We could see the quiet streets getting busier. The entrance ticket permitted us to enter 5 of the 21 sightseeing places mentioned in the brochure.

The Japanese Covered Bridge was the first spot we decided to visit. An offline version of Google Maps helped us in reaching it accurately. The place was teeming with tourists taking photographs all around as this is the most popular spots in the Ancient Town. We managed to get a couple of pictures but not without a few people photobombing it. The wooden bridge painted in red houses a temple, which I was told is dedicated to the God of weather. I could see from the bridge that a number of people were releasing sky lanterns which looked stunning.

Next on our list was the Cantonese Assembly Hall but since we reached the place after 8 PM, it was closed. A quick glance of appreciation to the wonderful gate and moved ahead. Here we split up, as the girls found some interesting stuff in the shops ahead. We guys went to an Ancient House, where, the owner said that his family had been living since over 300 years. The long wooden beams that support the entire structure of the house seemed to be in great condition. He had a good collection of different currencies from across the globe and some antiques on display. The Museum of Trade Ceramics had a lot of chinaware on display from different times. It also had artifacts to showcase the development of trade in Hoi An by means of the Thu Bon river.

We got in a good deal for some souvenirs and were headed back to our stay but got separated in the crowd during a splendid street performance by a few kids in a dragon costume. It wasn’t until the next day in Da Nang that I realized that this was part of the celebrations of the Mid-Autumn festival. We finally met near a bridge that was also covered in lights and lanterns. On sides of the bridge were the Chinese Zodiac symbols all lit up and in particular, the Rooster, as 2017, was the year of the Rooster. Multiple games were being played on the sides with various prizes to be won as part of the festivities. It was almost 9:30 pm and we left the Ancient Town to get some dinner at an Indian Restaurant, Ganesh. I had hoped for the Ancient Town to be still open when we come back but it happened to close by 10pm. 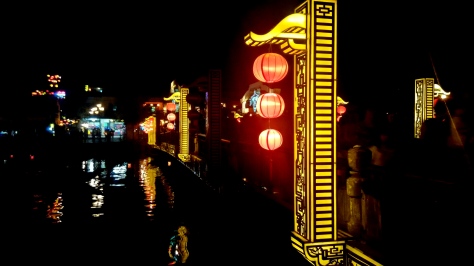 Hoi An provides a cultural experience unlike any other place in Vietnam. The lighting, the evening scenes, street shopping and well preserved heritage of the Ancient Town is surely not to be missed. The celebrations of the Mid-Autumn festival was the cherry added on top.

Do checkout our video on Hoi An below. 🙂

One thought on “Hội An – A Townful of Lanterns”