I awoke with a jerk as the Sumo braked to a halt. We had arrived at the Jiratang check-post. The driver, handed us out the forms to fill in our details which had to be submitted at the check-post. He said it will take about an hour before we leave and asked us to get some breakfast from any of the tiny stalls along the street. We has started from our stay in Port Blair around 4 AM and everyone were a bit drowsy. The spicy chutney served made quick work of our sleep.

After a long wait, the convoy finally started to move. The driver advised us not to take photos as we passed through Jarawa territory. The Government of India has banned taking photographs or interacting with the Jarawa and other indigenous tribe. We did manage to see a couple of them riding on the back of a truck but respecting their privacy and the rules, didn’t capture any photos. The long road journey along the Grand Andaman Trunk Road came to an end. A ferry took us across the narrow stretch of sea onto Baratang island. 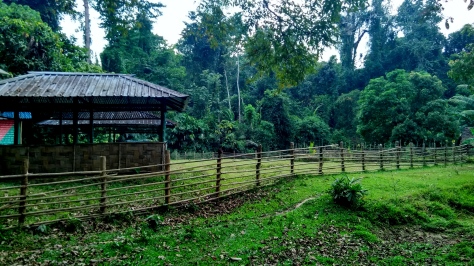 We had to fill out another form to rent a speedboat to take us through the mangrove swamps and visit the Limestone Caves. The speedboat ride was thrilling as it raced ahead in the wider regions of the swamp. I enquired about the Saltwater Crocodile but the man controlling the boat said that the giant reptiles seldom ventured into human routes. The boat slowed down as we entered a narrow creek to accommodate even returning boats. Along the shore, I saw a bunch of mud-skippers and the colorful fiddler crabs slowly walking inland with their over-sized claws.

We disembarked from the boat onto a wooden platform amidst the mangroves. The platform extended across the mangroves and onto solid ground of the island. We followed a trail with signboards pointing towards the limestone caves. Near the entrance a number of stalls sell coconuts, cucumber and raw mangoes. The caves, at the entrance, were darker due to oxidation of the limestone. We turned on our flash lights as we progressed further to view the stunning limestone formations. The formations stimulated imaginations to believe its in shapes resembling various stuff. The water from the roots which seep into the roof of the caves is rich in carbonic acid and is the essence of what forms the limestone structures. This may take up-to a million years to form. Some inconsiderate tourists had scribbled names along the walls of the caves.

Additional Places To See: The mud volcanoes, which are only present in Baratang Island in India, must not be missed. Also if you have time , visit the parrot island famous for the numerous parrots that come to the island everyday at sunset.

Baratang Island makes for a perfect one day tour from Port Blair. Riding a speedboat through mangrove forests, visiting several thousand year old stunning limestone caves and one of a kind mud volcanoes makes the day fulfilling. Observe the surroundings and you can appreciate the rich fauna in this marine ecosystem.