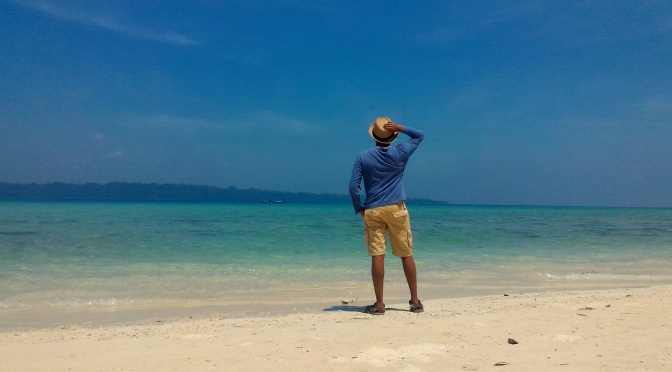 “Somewhere over there, is an empty beach chair with your name on it.”

Havelock Island is the largest island on Ritchie’s Archipelago and also one among the only two islands in the archipelago that is open to the public and developed for tourism – the other being Neil Island. Much like other islands in the archipelago, Havelock Island is also named after a British officer that served in India i.e. Major General Sir Henry Havelock. It has 6 villages in all most of which are turned into hotels and resorts along the beach.

The island gives you the feel of a perfect holiday with tropical weather, turquoise waters, rich marine ecosystems, white sandy beaches and friendly people. Our stay in beach huts at Ocean Tribe Resort, giving us access to the beautiful beach all night, was the cherry on top.

HOW TO GET THERE?

Havelock Island can be reached by a ferry from Phoenix Bay Jetty at Port Blair. Both private and government operated ferries are available. The government operated ferry is lighter on the pocket costing just INR 500 per person but needs to be booked a month in advance as the tickets are usually sold out. The tickets to the private ferries on the other hand are more expensive and usually available till a day or two in advance. Ferries can be availed to Havelock even from Neil Island. One can also reach Havelock Island by the Sea Plane to get aerial view of the islands which is quite expensive. (INR 4500 per person.)

We took the M.V Green Ocean which cost us INR 1250 per person for Royal Class tickets. The Green Ocean had an open deck to soak in some early morning sun and watch the tranquil ocean which is not an option in faster boats available there. The ferry took approximately two hours and twenty minutes to reach Havelock Island and we were lucky enough to sight a pod of dolphins jumping and getting playful to the side of the ferry.

Govindnagar Beach: Beach #3 or Govindnagar Beach lies just 3 KM from the dock where we stayed at Ocean Tribe resort in Eco-huts with a scenic beach front. The beach during the day is extremely clean with a scenic view of an island in the distance separated from Havelock by the sea covered in different shades of cyan. We hit the beach at night too and it was a great place to sit and relax by the sound of the waves watching the infinite stars in the night sky and share some spooky stories in the dark, moonless night. 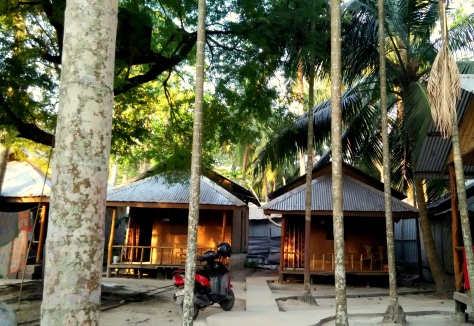 Beach #2: Havelock Island is one of the best places to go scubadiving. We took a short ride from the office of DIVE India on Govindnagar Beach to Beach #2 to reach our diving spot. A narrow path from the road surrounded by coconut trees got us to Beach #2. As we moved towards the sea we noticed a lot of mangrove trees. One could easily trip on their roots submerged but the crystal clear water helps to easily spot them during the day.

Radhanagar Beach: Named as “The best beach in Asia” by Time magazine in 2004, Radhanagar Beach, unsurprisingly, is the most popular beach on Havelock Island. The beach is a good 10 KM of muddy road away from the market area. The best option to reach here is the bus that runs every 40 minutes or so and charges just INR 10 per person. Radhanagar Beach lives up to its reputation of a spectacular beach. Fine white sand spread across a Kilometer with bright green vegetation on both sides facing a blue sky and clear water – it was a delicacy to the eyes. There is also a volleyball net for some beach volleyball. Thousands of tiny crabs burrow in the beach throwing out a small amount of sand which collectively seemed like a giant pattern at first until we took a deeper look. The beach is a “sunset beach” and can get crowded in the evenings. Visit in the morning to have the beach for yourself. 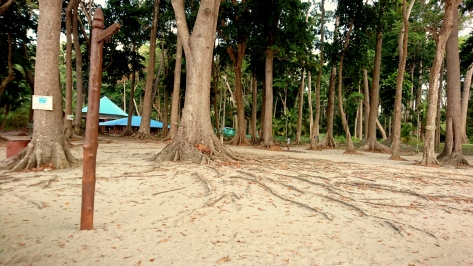 Additional places to see: Elephant Beach is famous for the coral reef present and is supposed to be the best spot for snorkeling. There is no road connecting to the beach and it can only be reached by either a 2 KM trek through tropical vegetation from Radhanagar Beach or via boat from the jetty. Kalapathar is another beautiful beach located about 7 KM from the market. The drive to Kalapather beach is a scenic one as the road lies along the coastline.

Havelock Island is the most beautiful and picturesque island in Andaman. The stay at the beach huts, scuba-diving and the stunning beaches left us wanting to stay longer but we had a schedule to keep. If you have an additional day to spare, plan it at Havelock Island.