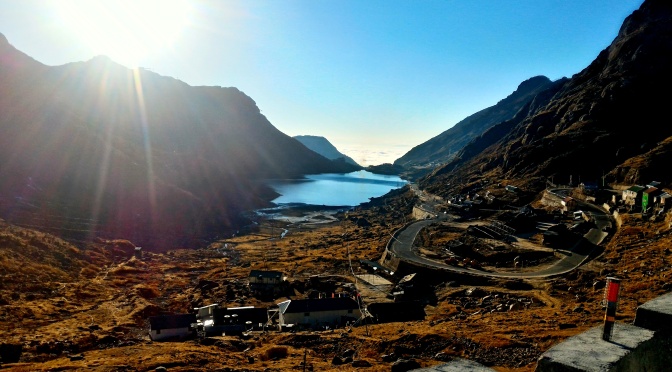 Gangtok – the largest town and the capital of Sikkim lies along one side of a hill. Although, it enjoys a stable mild climate throughout the year, it is prone to frequent landslides during the monsoon. It is also in close proximity to the Indo-China border of Nathula Pass.

How to get there?

Gangtok, like the rest of Sikkim is only accessible by road. The nearest airport is at Bagdogra, which is 120 km away. We returned to Gangtok after the visit to North Sikkim(Lachung and Lachen) . Before leaving for North Sikkim, we had Mr. Sonam arrange a cab for us to get around Gangtok- Nathula Pass, Tsomogo Lake and the permits required.

Nathula Pass: Nathula Pass lies along the ancient silk route connecting Sikkim in India and the autonomous region of Tibet, China. Nathula Pass is around 50 kms from Gangtok. Although we left early around 9 AM, we had to wait around almost an hour near the checkpoint because we had to wait for a couple more tourists from the same tour operator. The taxi drivers often get 1 pass done for a group of nine as the pass is cheaper for 1 big vehicle. We finally got there and had to climb 50 odd steps. Most people were panting about half way due to the altitude (14000 ft) of this mountain pass.

There’s a memorial at the top for all the brave soldiers who laid down their lives protecting this border just opposite to the Indian flag flying high. We could see its counterpart, the Chinese flag, just a few feet away across a small 1 feet retaining wall. The Indian soldiers were there to help and guide the tourists politely dissuading anyone from crossing the Line of Actual Control (LAC). It was a nice experience interacting with the soldiers as they spoke to us on a personal level. Surprisingly enough, there was a not a single civilian on the other side of the border and all we could see was barren mountainous terrain with no indications of any people residing there. Capturing any photos at the border is strictly not allowed but we did take some good snaps just outside.

Elephant Lake: About 15 km away from the Nathula Pass, is Elephant Lake. The lake derives its name from the shape of the lake, which resembles an elephant. Also called Kupup Lake, this lake is stunning with crystal blue water which sparkles with the sun’s reflection. We got to the viewpoint and savored in the sight of the lake and its surroundings. As the highlight of the lake is its shape, the viewpoint is at a height from the lake and we didn’t consider walking down to the lake which would have been exhausting.

Baba Mandir: The Baba Mandir lies on the road to Elephant Lake. The shrine, also known as New Baba Mandir, is dedicated to Harbhajan Singh who was a Sepoy in the Indian Army. There is another shrine, known as Old Baba Mandir, which is 1 km inwards. The Old Baba Mandir is at the original location of the bunker where he was posted.

Legend has it that “Baba” protects the borders at night and informs soldiers of any untoward incidents. The story goes that Baba was a popular among the locals due to his helping nature. One day, he slipped and fell into a fast stream and his body was not found. A few days later, Baba appeared in the dreams of one of his fellow soldiers and told the exact location as to where the body would be found. Since then, Baba appears in the dreams of the soldier and informs of any dangers.

The bunker need a 50 step climb and like at Nathula Pass, the climb was tiring due to the limited oxygen available to burn. We paid our respects to Baba at the bunker. From the bunker, we could see that we were above the clouds, the surface of a sea of white visible at a distance. It reminded me of the Skypiea episode from One piece.

Tsomogo Lake: On our way back to Gangtok, we visited the Tsomogo lake. the lake also called as Changu Lake by locals, is considered holy by the locals. The lake is comfortably nestled between mountains at 12,300 ft and is an amazing view from the roads on the top. The lake is a clear crystal blue between two mountains with the sea of white in the backdrop. The Lake is said to change colors with seasons.

Along the lakefront, well decorated yaks are available for rides. There are also a number of stalls selling woolens, snacks and tea. We had some hot noodles and tea here. It was late afternoon and we could see the fog building up. After a while the visibility became very low down to a few meters in the front. We stopped in between for a few clicks amidst the thick fog.

Additional places to see: Tukla Valley, Jelepla Pass, Menmecho lake and Yak golf club are other places you can see if you have an additional day to spend.

The whole trip around Nathula leaves you with more appreciation and pride in the Indian Army. The high altitude lakes are too beautiful to skip. We also heard that there are camping stays by some of the lakes. Do check that out if you’ve got the time. If you happen to have any breathing issues, consult a doctor before going to these places.

2 thoughts on “Around Gangtok-A day trip filled with patriotism”