At an altitude of 7200ft, Pelling is a pleasant yet relatively unexplored town in the foothills of the Mt.Kanchenjunga. This town in the western part of the state of Sikkim is the closest you can get to the the 3rd highest peak in the world without leaving comfort.

How Did We Get There?

The state of Sikkim is neither connected by air nor rail. Taxis are the only means of transport up here. We took a taxi to Pelling from Darjeeling which was hard to get as the drivers insisted that it is an unusual route for them. But Our friend from the hotel in Darjeeling, Amrit, did arrange one for us. (Thanks,Amrit.). The road leading to Pelling is bad. So, do leave early in the first half of the day as most drivers don’t agree to take this road after dusk. To get around Pelling, hired taxis are the best option. The driver, Mr. Gopi, who also served as our guide, took us around Pelling.

Kanchenjunga Falls: There are numerous waterfalls in Sikkim. This is one of the larger ones. The source is believed to be the glaciers of the Mt.Kanchenjunga and hence the name. There a few steps to climb to reach the best spot. There were a few people specifically standing on the slippery trail to help us get there. It is a memorable experience with the sound of water flowing down the fall and the mist created by it. We had the rest of the time getting some good snaps up there.

The entrance to the waterfall comes at a minimal amount of 10 Rs per person. Also, there is a very small rope way in front of the falls but not worth it. 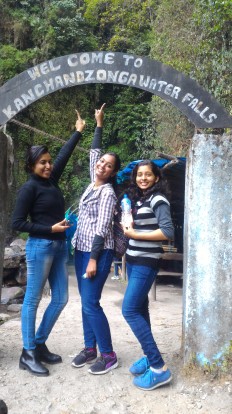 Khecheopalri Lake: An hour’s drive from the hotel, Khecheopalri lake is considered sacred by Buddhists and Hindus. We had to walk about a kilometer after offering our prayers at the shrine at the entrance with a large prayer wheel. The lake is surrounded by thick vegetation and the only way to get to the lake is along a wooden deck extending to an edge of the lake. The wooden deck is covered on both sides by prayer wheels.

Apparently, the lake is also a wish fulfilling lake. The lake, being sacred, is protected and hence no one is allowed to step into it. However, the lake has fish (seemed like carps) in abundance that were happy to munch down on the Parle-G  biscuits that we fed them.

Rimbi Falls: On the way back from the lake, we came across this small waterfall. There’s not much water but you can stop here for a break and take some good pictures.

Singshore Bridge: Having heard that this is Asia’s second highest suspension bridge, we were not disappointed when we arrived. The bridge is beautiful on its own and provides a stunning view of the hillside and the lush valley below. Being almost devoid of other tourists, it was a great opportunity to take some nice snaps. Also, try the tea sold at the edge of the bridge. 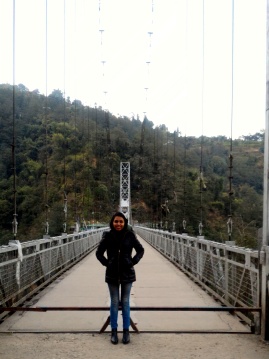 Campfire and Tumba: What better way to end your day than sitting around a campfire on a chilly December night in Pelling. The driver, Gopi, was a generous man and invited us over for Tumba/Tongba along with his family where he had a fire lit to warm us up. Tumba is a mild alcoholic beverage made from millet and served in a bamboo jar with a bamboo straw to drink from. We also played antakshari with them. Thank you Gopi for a wonderful evening.

Gypsy time with the Localities

Additional Places to see: There are a few more places to see around Pelling which you can visit if you have got another day here. Rabdentse Ruins-the ruins of the former capital of Sikkim which was destroyed after an invasion in the 18th century, Pemayangtse Monastery and Karchen Power Plant are to be given a try. Also, 20kms from Pelling, is the town of Legship, where hot springs are available.

Pelling is a wonderful place-lush greenery, numerous waterfalls and snow capped mountains take you to a different world altogether. A single day is not enough to make the most of this place. Plan for 2 days here and visit the ruins and the hot springs as well.

2 thoughts on “A slice of Pelling in winter”