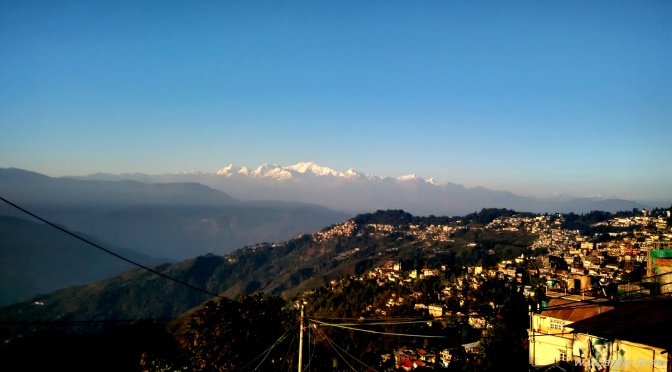 Located in the Lesser Himalayan Belt at a height of about 6700 ft in the state of West Bengal, Darjeeling is sure to amaze you. Surrounded by tea estates on the hill slopes, the towering Mt.Kanchenjunga and other snow capped peaks in the sky, and the iconic toy train chugging along the road, we were awestruck as we journeyed up the hill even with our ears blocked due to the change in altitude.

How Did We Get There?

Starting from Bengaluru, we, a group of 7 took the early morning flight to Bagdogra, the nearest airport(70kms) via Kolkata. There are also direct flights from New Delhi and Guwahati. One can also take the train to New Jalpaiguri, the nearest major railway station connected to all major cities in India. From Bagdogra or New Jalpaiguri (NJP), you need to travel by road to Darjeeling. Local taxis or shared jeeps (3 hours) are the preferred way to go. We took a shared taxi which is usually a 10 seater and paid the fare for 10 people (150pax) and took the entire vehicle for the 7 of us. Alternatively, you can also take the toy train ride(7 odd hours) up-to Darjeeling from NJP.

Tiger Hill: This is one of the best places to see the Sun rise. To get a good viewing spot, we had to wake up in the chilly December night at 3 AM. Sleepy eyed we got into the taxi, and upon reaching the destination in the dark, shivering, we were amazed to see a huge number gathered already and hawkers selling woollies and tea. “Do they even sleep?”, we wondered. As you spend the rest of the time tugging to your jackets and sipping some tea, it is worth the wait for one of the most spectacular sights- the Kanchenjunga lit up golden at first light and then you see a shining ruby emerging from the horizon.

Tea-Estates: Darjeeling is famous for its authentic tea. A sense of calm engulfs you as you walk through these tea gardens. Don’t forget to bag one of these boxes when your heading back home. Also, you can take photos by dressing up in the traditional attire and tea picking baskets.

Cable-car and Toy Train: Unfortunately, the cable car services were under renovation so we couldn’t try that. And of course the toy train, a UNESCO heritage, one of the very few steam engines left in India,still chugging all around Darjeeling and spewing coal in the air. It is a wonderful sight but travelling at a snail’s pace,its best avoided going aboard.

Peace Pagoda: A Japanese Buddhist temple, place for those who are delighted by the calmness. Take some time to relax here.

Batasia Loop: It is a track for the toy train in the form of loop surrounding a war memorial. The memorial is a tribute to all the soldiers of the Gorkha Regiment who have laid down their lives in various operations post independence. Also you get a good view of the Kanchenjunga from here.

Shopping: Chowrasta Bazaar, A local market. the market extends into all the small alleys to the main centre. You will love this place if you love street shopping. Plenty of good stuff but you need to bargain. But make sure you get back to your hotel before all the shops and the cabs shutdown(and that’s 8pm).

Zoo and Mountaineering Institute: The Padmaja Naidu Himalayan Zoological Park or simply, the Darjeeling zoo is one of the few places where you can spot the Red Panda, Snow Leopards and Tibetan Wolf. Although it is small and contains a limited number of animals, take an hour off to spot the rare and endangered animals here. The Himalayan Mountaineering Institute, which comes in free with the zoo, can be missed. Nothing significant to see for the average tourist.

Mirik Lake and Pashupatinagar: About 50kms from Darjeeling, Mirik Lake is a pleasant sight amidst the greenery in the early hours. Expect to see clouds and mist after 3 pm and you might need some heavy woolen if you are not used to the temperature. A few kms from here, you can reach the Indo-Nepal Border. However, this border is open only to the citizens of India and that of the Kingdom of Nepal. The main attraction here is the Pashupati market, where you can get stuff at a relatively cheaper rate.

The cool weather, picturesque view of the Himalayas in the backdrop, a toy train that takes you back in time to the Victorian era and monasteries makes Darjeeling an ideal romantic getaway like a perfectly blend cup of Darjeeling Tea. Go out there and sip on it.

One thought on “Darjeeling, where the clock stood still”